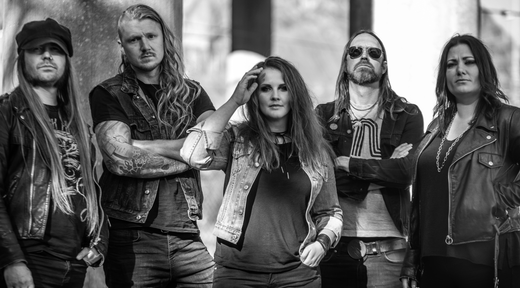 Sprung from the windswept West Coast and dark forests of Småland, Swedish heavy newcomers Electric Hydra has made a rumbling entrance to the hard rock scene.

Electric Hydra was formed in late 2017 after a night out where the founding members Sanne, Ellinor, Jonathan and Jonny met for the first time. Their first year together as a band they mainly focused on doing live shows and released their first single World Domination. They were described as an energetic live act and with their punky, stoner sound the band became a well welcomed band to the heavy underground scene.

Two new singles were released in 2019, The Burden and The Last Of Us on Moondawn (The Lurking Fear/Bombs of Hades) The year was also packed with shows at both smaller venues and festivals in Europe such as Sweden Rock Festival (SE), Fuzzfestival (SE), Malmöfestivalen (SE) and SWR Barroselas Metalfest (PT). In the autumn some pre-production was made in Welfare Studios but now Jonny decided to leave the ship and was replaced by Dennis Åhman (Odcult) on drums.

Early 2020 the work on the self-titled album Electric Hydra begun. Recorded during the “great” covid-pandemic in Shimmer Studios, Studio BO and Welfare Studios with contributions from Jonas Stålhammar (At the Gates, Bombs of Hades) When the recording was finished, Jonathan decided it was time for him to focus on other things and therefore left the band. To fill the gap, Jonas Stålhammar and Peter Söderberg (Capricorn) joined forces..